Home / Company / About us

The specialists in freight road transport

For 90 years, the dedicated Guilbault team has specialized in road freight transport and strived to provide effective logistics solutions across Canada and beyond our borders.

Guilbault has more than 800,000 square feet of storage space, as well as 1,070 employees who expertly handle more than 600,000 shipments per year and cover 40 million kilometers annually. We are proud to say that our drivers are committed to the movement and security of your goods throughout the transportation logistics chain. With an average of over 98% of deadlines met, you can trust Guilbault to deliver your goods on time! 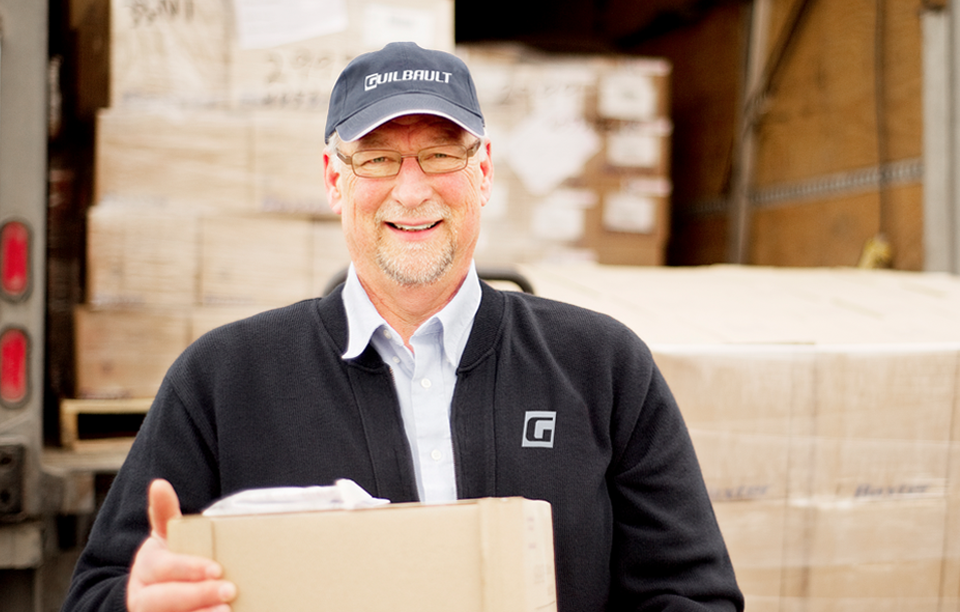 At Guilbault, our mission is to simplify the mobility of our customers’ freight. That’s why we have developed and maintained lasting partnerships to help you better oversee your supply chain, lower costs, increase efficiency and boost your business performance!

We are known for the professionalism of our staff, the reliability of our service, the innovative technology we use and the safety of our equipment.

Our story starts in 1929 when Paul Guilbault, a young visionary from Grondines, started the company at just 22 years old. With his first Rugby truck, Paul transported local farmers’ milk from Portneuf to Quebec City and hauled goods to Saint-Casimir and Grondines on the way back.

One thing led to another and soon the whole family joined him in his venture, which quickly grew into Transport Guilbault, especially with the launch of transportation service between Quebec City and Montreal in 1935.

When Paul Guilbault died on January 8, 1959, his brother André took the helm as company president. He served in this position until 1972, when he decided to pass the torch to four members of the next generation: Jean Guilbault, Michel Gignac, Richard Guilbault and Pierre Guilbault.

From that time on, Guilbault’s service area and the number of technologies used continued to grow. Consecutive acquisitions led to service for the Bas-Saint-Laurent region, the Atlantic Provinces, the Eastern Townships and the Outaouais region. In 1999, with its network stretching across North America, Guilbault upgraded its entire computer system to the latest cutting-edge technology.

In 2005, in response to clients’ growing needs, the Guilbault team began offering a new warehousing service for goods awaiting distribution throughout North America.

Guilbault’s exclusive i3G freight management system, developed in 2011, brought the transportation of goods to new levels of efficiency and allowed clients to receive real-time information about their shipments.

2017, a pivotal year for Guilbault, brought many changes and improvements. In addition to building a new terminal in Rimouski, Guilbault acquired a major company specialized in warehousing, logistics and transportation, Ideal Logistics Solutions, in business for over 70 years in Quebec and Ontario. This strategic alliance positions the company as the third largest player in the industry, adding more than half a million square feet to its storage capacity.

In 2018, the company opened a thirteenth terminal, next to its Lachine warehouse, to better serve the Greater Montreal Area struggling with a problematic road network. The positive impacts of this new point of service were quickly felt: delivery performance in the area has since enhanced. Guilbault has also acquired a new warehouse located just two minutes away from the Boucherville terminal. Offering an additional 150,000 square feet for warehousing, complementing the existing facilities of Lachine and Quebec City, this new building also allows Guilbault to offer 10,000 square feet of office space for rent to customers using storage service or to other small companies.

With its 1,070 employees distributed in 13 terminals and 2 warehouses across Eastern Canada, Guilbault is definitely on a roll and the story is far from over!

Since the founding of Guilbault, we have: